Right, so the first thing you need to know is: I’m not Chrissy. My name’s Drew, and I’m here tell you about an exciting new release of dbatools: schwifty!

In this release we’ve added three new commands to help you manage SPNs for SQL Server Kerberos authentication. If you have a lot of linked servers in your environment, then this is probably a welcome addition to the toolset for you.

These commands leverage SQL Server instance info from commands that already existed in the dbatools code base and active directory PowerShell support to determine required SPNs for all instances on a given computer and whether they’re set or not. If they aren’t, we have commands to not only set the SPNs for you, but also enable constrained delegation to accounts for the SPNs that were just added.

Before these functions were added to dbatools, you had a couple options when it came to checking/adding SPNs:

Now we have four new commands to help manage SPNs – Get-DbaSpn, Test-DbaSpn, Set-DbaSpn, and Remove-DbaSpn. Our goal with the new SPN commands was to make them fast, and make them at least as useful as the GUI tool provided by Microsoft, but to allow multi-server administration and automation of setting correct SPNs and enabling constrained delegation. And we’ve done it! These commands are based on guidance from MSDN about setting SQL Server Service Principal names which you can read more about here.

Oh and for the performance minded among you, we’ve built these functions to be super fast; faster than the traditional setspn.exe and Configuration Manager options by quite a bit. While the GUI tool took up to 51 seconds per server, our testing showed the ability to return required SPN info for 9 servers in 9 seconds. That’s 1 server per second, granted, we don’t test for SSAS or SSRS at this time, but we do have it planned, and it’ll still be quick.

Take a look below for a detailed description of the new commands in this release. You can use these new functions by grabbing our latest release (0.8.709).

A couple things to note when using these functions: 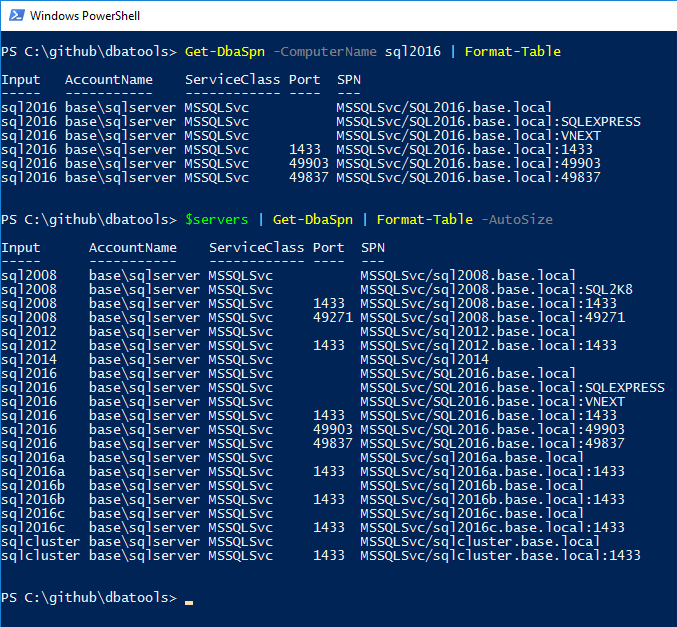 You can even check your entire estate in just one line. Here, you can see us testing several instances in our lab.

Or use Test to help easily Set all required SPNs 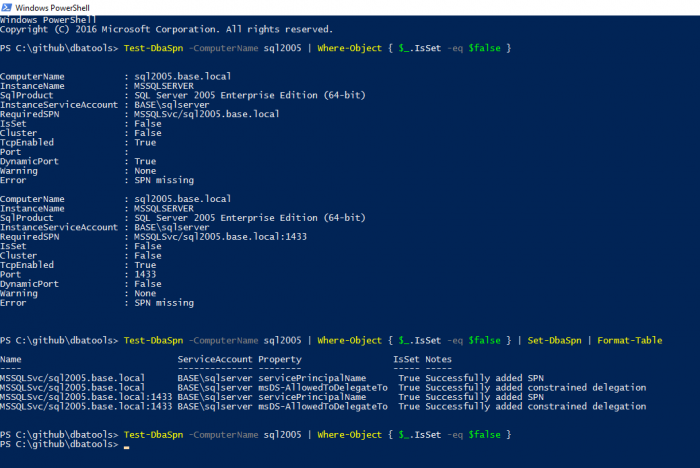 Connects to Active Directory and sets a given SPN to a given account. Will also set constrained delegation to the account to the recently added SPN.

Connects to Active Directory and removes a given SPN to a given account. Will also remove the associated constrained delegation.

The following screenshot shows a way to easily remove SPNS of decommissioned servers.

We also have a few other commands that can help you deal with SPNs.

These commands are just the start of our support for SPNs. Right now, they’re just focused on SQL-related services on your computers. In the future, we’re going to extend these scripts to look at ALL services on your computers and tie them back to service accounts and SPNs. This includes SSAS, SSIS, and SSRS SPN support. We’re also going to keep looking at the commands and adding support for anything we didn’t think of when we released, which is why it’s important that you give us feedback (more on that below).

Thanks for reading, and I hope you enjoy these new commands! If you have any issues or questions about their use, feel free to drop by our Slack channel, #dbatools, and let us know. We’d love to hear from you!

11 thoughts on “new release – schwifty – all about SPNs”