In this release, we gained 22 new commands, 7 new contributors to the dbatools master repository for a grand total of 46! We even added a couple new Major Contributors to the team. Thanks to all who have joined in to make the awesomest toolset for SQL Server DBAs — we’re now offering the community 154 quality commands!

We released the follow two commands in snowball but wanted you to download the latest version of dbatools which includes some really awesome improvements to backup and restore.

In this release we have 22 new commands, several bugs fixes and a bunch of improvements. Note that many of these commands were available in snowball but they weren’t officially released with a supporting webpage and additional testing.

We actually release to the gallery a little more often than we blog about. If you’re using Windows 10, have access to the PowerShell Gallery (some corporate networks may not) and would like to be notified about updates, use Watch-DbaUpdate. It’s super cute and tries not to be annoying.

It’s also our mascot, Tron’s, debut in the toolkit. You’ll be seeing more of him around, including in an upcoming blog post.

We’re gettin Enterprise up in here! Thanks to our newest Major Contributor Friedrich Weinmann, we’ve now got a really cool configuration system. This will be helpful for our developers. We’ll have more information in a blog post during the 1.0 redo, but here’s a quick lil overview.

The awesomest improvement is our full on Enterprise-lookin’ logging implemented by Fred. We’ll be writing some blog in-depth blog posts which discuss the logging system in depth, but for now, check out what happens when I open our logging directory using Invoke-Item (Get-DbatoolsConfigValue -Name path.dbatoolslogpath) 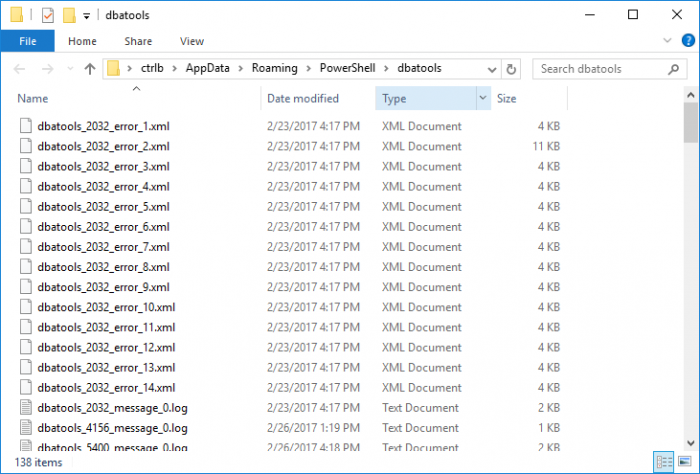 Whaat! Such good looking logging. Thank you Fred for all of your work on this!

Just a reminder: on March 1, 2017, we will initiate a feature freeze. This means that we will no longer be accepting new commands or PRs for new features until we’ve fully implemented all changes that were decided upon for the 1.0 release.

A feature freeze is necessary because we invest time vetting each PR and in order to reach 1.0 in a timely manner, we need to focus on bug and style resolutions. We’re asking anyone who can code to help fix the 43 bugs currently filed at GitHub and address the style changes that the community decided upon.

If you’re available to help, we’d love it! Even if you don’t know PowerShell, we’ll need help updating the website with screenshots and examples with the updated parameters and command names, and other tasks of that nature. We will be working on the following:

We plan to resolve all bug issues first and will continue releasing on a regular basis until the style changes are implemented.

Visit the downloads page for information about how to download and install dbatools (it’s 1 command).

Some of these commands are in their infancy. Want to help make them better? Come join the coding party! We’re all hanging out on the SQL Server Community Slack in the #dbatools channel. There’s almost 500 of us there now (but the conversation load is reasonable).

Thanks for reading 😀
- Chrissy