Hey all, I am Andreas Schubert and I am working as a Principal Consultant and Database Reliability Engineer for SQL Server & Azure for multiple national and international companies. My focus is on implementing and operating complex 24/7 SQL environments with tens and hundreds of servers and multi-terrabyte databases.

With the multitude of environments that I am operating, it’s impossible to remember every server, every database or the multiple different ways they are interacting with each other. Therefore, one of the first things I do when taking over a consulting engagement is mapping out all those different bits of information.

Since the environments usually change pretty fast, my goal is to automate this process as much as possible.

In this series of posts, I will try to show you how I am implementing this. Of course, your requirements or implementations may differ, but hopefully this blog post can give you some ideas about your tasks too.

Before dbatools existed, I had to rely on either the various monitoring solutions that my customers are using or on scripts created by myself. There are a lot of really great 3rd party tools out there that do an awesome job. Unfortunately, they all differ in how they are used or what information they report back. I needed something that is easy to implement, with as few dependencies as possible and works across all SQL Server versions. That’s when I started using dbatools.
I immediately felt in love with how flexible it is. And boy, did its functionality grow fast!

Today, there are tons of commands available that cover almost all, of the various, areas SQL Server has to offer.

Before I dive into specific SQL Servers for in-depth analysis, I want to see some sort of inventory. The minimum information I would like to collect is:

Whoever has built an inventory script in the past knows that collecting the above information requires quite a few scripts. On top of that, the underlying DMVs have been changed between SQL versions, so you need to account for that. Microsoft has made that much easier with providing SMO (SQL Server Management Objects), a set of libraries that abstract away the complexity of collecting that information. Thankfully, Microsoft also enabled the dbatools team to include SMO in their framework. My example solution relies solely on dbatools (which works – not only but also – with SMO).

Right at the beginning of any of my scripts, I am defining the root of the script itself. I do this because I re-use a lot of functions.

Since we want to collect the information for more than one SQL Server instance, we will first build a list of SQL Servers. We could query the list of instances from a central management server, but for the purpose of this post – and portability- we will keep it simple. We will also assume the account executing this script will have sufficient permissions on each SQL Server instance and that it can connect via Windows Authentication. I generally prefer Windows Authentication over SQL Server authentication due to security concerns, but that is a completely separate topic.

The names of the Servers will be coming from a simple text file in our example. Just do me a favour and do NOT put your server list into an unsecured network location – again, we need to keep security in mind. 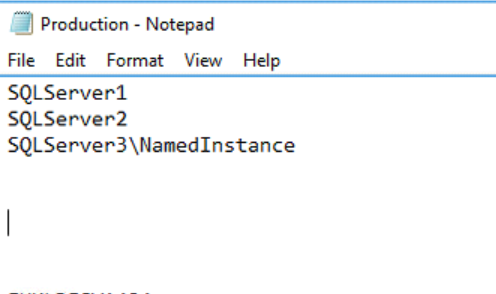 Next, we need to load this file into our PowerShell session. For the sake of simplicity, I am loading it explicitely into my script. Normally, I have a variable populated with the servers in my profile, so I don’t have to do this each time.

Similar to the actual server list, I am using a text file “AliasList.txt” to store the alias information i mentioned above:

It´s the same system: the name of the server or instance, followed by the alias name. Both values are separated by a semicolon. Loading and storing the alias information in a hash table is a simple one-liner in PowerShell:

Since I usually exclude system databases from my reports, I am defining a separate list of them as well for easier reuse:

At this point, we have all the preliminaries completed: A list of SQL Servers to query, a list of system databases that we will exclude and a list of alias information. Let’s hit the servers and put the resulting data into a variable. I’ll first show the complete code block, then we will talk about what it does.

While this code may look complex, from a PowerShell point of view it’s really pretty simple. First, we take the list of our Productionservers and pipe it to Connect-DbaInstance cmdlet. Connect-DbaInstance is the result of dbatools calling the SMO functionality, returning a complete SMO object of the SQL Server connected to.

Technically, the part with $rawData = $ProductionServers | Connect-DbaInstance already gives us all the information we need for our report. But since we don’t want to return all the possible SMO properties and objects (that would result in a very long operation), we pipe the results of this directly to a Sort, followed by returning the actual information we are interested in:

First we extract the Computername. On the next two lines, we map the SQL Server major version number to a clear-text string:

Right on, we extract the product level (e.g. RTM, SP1, …) and the Edition of the SQL Server (Standard, Enterprise…), followed by the available machine memory. Since this is returned in MB, we format and round it so that we get a nice number in GB (e.g. 12, 48 or 128).

Then we include the number of logical processors and the name of the instance – in case we have a named instance.

The number and size of user databases is a bit more complex. We need to query the “Databases” collection of the SMO Server object, filter out the system databases, get the size property of each object in the collection and measure it (count for the number and SUM for the combined size of the databases). Of course, we want those numbers to be nicely formatted and rounded to the full GB, so we add the formatting as well:

To get the size of the biggest / largest database on the server, we use the same technique, only that we sort the database object list by size in descending order and take only the first object:

The PowerShell pipeline can be really awesome!

And exactly the same way for the role of the current replica as well as the cluster object name:

That’s a whole lot of information retrieved by just one call to a PowerShell method. How awesome is that? Most of our script is logic around formatting and extracting information from sub-properties and objects.

And finally, we add the Alias to our result, matching them by computername:

The last step is to convert our object to HTML and add some css styling to it. Then we can either send it via eMail or store the generated html as a file for future reference.

The result is a nicely formatted html report:

This was only a very basic example of what you can do with PSTools, PowerShell and a bit of magic piping. I hope you found this useful.

For questions and remarks please feel free to message me at any time!

You can find the complete script in my GitHub repo.